You can play Die Goldene Maehne des Samson on this website so you don't need to download and install the game on your computer. We recommend to use Google Chrome when playing DOS games online.

You can skip the intro by pressing Esc, but then you'll start the game with the default male character.

Die Goldene Mähne des Samson ("Samson's Golden Mane") is a first-person adventure game that was originally supposed to advertise a German tobacco company. The story takes heavy cues from the Indiana Jones franchise: set sometime in the 1930s or thereabouts, it takes the player to explore Petra and other remote, exotic locations in the search for fabled treasure that is said to endow its owner with mystic powers.

The game starts with a plane trip over the desert that ends abruptly with an emergency landing, but the main character befriends a nice young archaeologist of the opposite sex (depending on which character the player chose), and together they set off to find help, but end up exploring the ancient catacombs of Petra instead. The game engine is generally comparable to that of Blake Stone: Aliens of Gold, but interaction is mostly mouse-driven like in point-and-click adventure games.

Samson is entirely in German and has a lot of dialogue, including some historical reference about the places visited by the duo, but should be playable without any knowledge of the language as game puzzles can be generally understood without explanation, while most dialogue choices do not really affect anything (but you'll miss some hints and a bit of the story). Even though this is a advertising game, the full version was sold but the first episode is free under the shareware model. 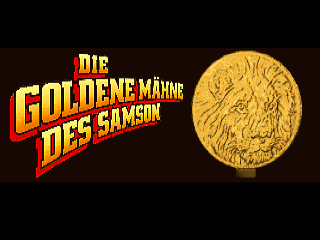