Dominus is a fantasy real-time strategy game with many similarities to Dungeon Keeper. As the Overlord of a magical realm, the player must defend it against several invading clans by strategically deploying various fantastic creatures, concocting and using intricate spells, and in some cases, by appearing on the battlefield in person to change the tide of battle.

The player's kingdom is divided into sectors where troops can be deployed and traps placed. Friendly monsters are not controlled directly but will act on their own once placed on the map. Additionally, orders can be assigned to the realm's four generals, each with their own army of monsters, to carry out defensive and offensive missions, create and deploy traps, or spy on the enemies.

Members of invading forces may be captured and then interrogated to obtain useful information about the clans, or even to learn new spells. Another unusual feature is the ability to create new monsters by mixing existing ones. 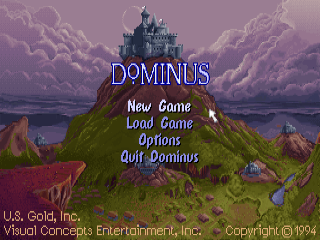