You can play Future Conflict on this website so you don't need to download and install the game on your computer. We recommend to use Google Chrome when playing DOS games online.

To play this game, please use the SVN build of DOSBox available at the DOSBox ECE website (please see the links section below).

Make sure to load the IRQ unmasking tool before playing if you intend to use Sound Blaster effects in DOSBox. Recommended CPU cycle value: around 12010, simple CPU core recommended.

Believe it or not, Future Conflict is a fully featured clone of Command & Conquer created by one man, Chris Jones (better known as the creator of Adventure Game Studio). The two opposing sides, Government forces (orange) and the Rebels (green), are roughly counterparts of GDI and the Brotherhood of Nod, but there are many differences in playing mechanics, the tech tree and the available units. Some more advanced features from Red Alert, like unit groups, are also present.

The game offers one single-player campaign for the Government side, skirmish mode as the Rebels on several maps of various sizes, and two-player multiplayer games. The only real downside is the "programmer art" quality of graphics (but not without a certain charm to them), occasional small graphical glitches, and unit pathfinding does leave a lot to be desired (but who's perfect in that department?).

Future Conflict is "officially" shareware but de facto freeware: the author himself states that he "[does] not care if you register or not", but registered users would receive bonuses such as a terrain editor, mission builder and unit editor. Otherwise there are no limitations in the unregistered version, it's the complete game. 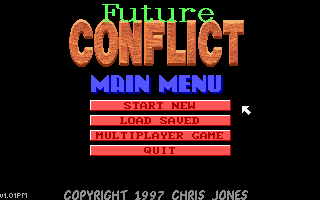