The demo contains one scenario (map) designed for both single- and multiplayer hot seat modes.

The file OrdaDemo.zip contains the Russian DOS version of the game and horde_demo.zip is the English language Windows version. NOTE: Both versions come with a Windows installer that does not work in DOSBox.

To play the Russian version, you need to type a nation leader's name in the box (screenshot). Type "Jktu" (without quotes) tom play as Oleg (red), "Bujhm" - as Igor (blue), and ""qhbr" - as Eric (teal). You can select one leader and start the game, and the next time you load the same game all three leaders will be available from the list.

Horde is a strategy game based around Russian folk stories. The player starts with his/her hero and a few of his warriors setting up a settlement. In the course of the game the player develops his/her city economically and builds an army to protect his/her country from aggressive neighbors.

In the beginning the player’s army is small, and he/she tries to keep the fragile peace with other nations. But at length he/she becomes strong enough to attack and conquer those, who once were a menace to his/her land.

The game features strong economic and military elements. In most similar games (Warcraft etc.) player’s only income is the gold his/her workers mine, the wood they cut and so on. In Horde based primarily on tax collected from the inhabitants of his/her settlement.

The game features move based and real time modes. The game is divided between diplomacy and huge battles, in which a great number of units can take part. The gameplay is very well balanced and the system requirements are very low (486 and above). 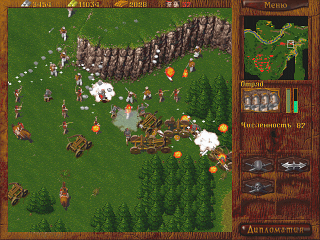