In DOSBox, you need to set CPU cycles to around 26000 for the game to run at an acceptable speed, as it is a real mode application (so DOSBox won't switch to maximum possible cycles automatically).

Kaos is a first-person shooter game with many similarities to Wolfenstein 3D and DOOM. It was developed by a small team of Italian coders and artists in the mid-90s but never completed. The most recent version of the game, along with the source code, was published in 2003 on a cover disk of the Italian gaming magazine The Games Machine.

There are three complete (and rather large) levels, six weapons, several monster types, and powerups including invincibility/bonus health and extra damage. Kaos boasts several rather progressive features - at least, for a game using an engine similar to that of Rise of the Triad - such as weather effects (rain and lightning), positional sound and destructible environment.

The game comes with a level editor, allowing the players to create their own level packs. 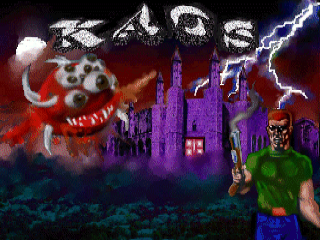