You can play King's Quest II: Romancing the Throne on this website so you don't need to download and install the game on your computer. We recommend to use Google Chrome when playing DOS games online.

You can download the full version of King's Quest II: Romancing the Throne from the download store listed below.

After having recovered the three treasures, King Graham has been crowned king. Now having needing a queen for companionship, Graham searches the land for a maiden, but to no avail, so he turns to the magic mirror for help. The mirror shows him a beautiful girl locked away in a quartz tower in a faraway land of Kolyma, and must find three keys that are used to unlock the door that will lead to her.

King's Quest II: Romancing the Throne is a graphic adventure game. As is typical for Sierra's AGI games, players move Graham around with arrow keys and perform actions by typing commands in the interface, which are usually a verb/noun sequence. Like the first game, a good knowledge of fairy tales is required to solve some puzzles. 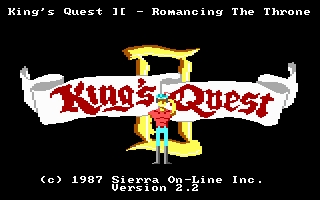