Locus is a futuristic sports game where competing teams drive armed cycles in variously shaped arenas, trying to score goals with up to two balls present on the field. The game is vaguely similar to Cylindrix in both the concept of a gravity-defying team game that plays in oddly shaped spaces, and the use of AI teammates on the player's side.

The playable demo offers one "triad" (a set of three matches across different arenas) with fixed teams. 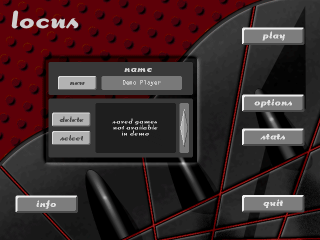