Lord Avalot d'Argent is a spiritual successor - and, in a way, a sequel - to Denarius Avaricius Sextus. The main character, a mediaeval English lord by the name of Avalot d'Argent, is Denarius' descendant and looks very much like him (as per the Identical Grandson trope). The quest is now to rescue a princess, but gameplay and humour remain largely in the same vein as the Roman original.

Avalot features some improvements in the user interface department, but visually it is rather similar to the first game. The text parser is now complemented by mouse commands, and there are drop-down menus for easier game control and navigation. Dialogue lines are now displayed in coloured speech bubbles.

The game was originally sold as shareware, but the unregistered version contains no limitations. Registered users would receive bonus merchandise, including a T-shirt. 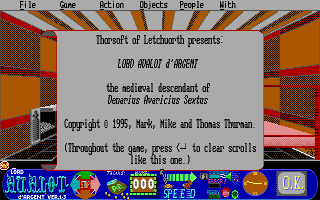