You can play Powerslave Official Beta on this website so you don't need to download and install the game on your computer. We recommend to use Google Chrome when playing DOS games online.

If the browser version plays slowly, try reducing the screen size by pressing the minus key.

This is a pre-release test/demo version of Powerslave with numerous differences (mostly minor and/or cosmetic) from the final release of the game. It also has several non-critical bugs that can be exploited to get a lot of ammo and other items.

The beta includes two levels that can be played in any order. 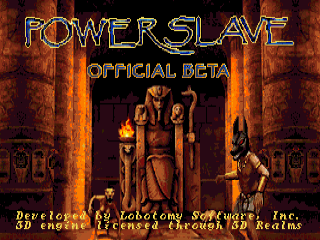