You can play Speed for Dummies on this website so you don't need to download and install the game on your computer. We recommend to use Google Chrome when playing DOS games online.

Speed for Dummies is a sprite-based behind-view arcade racing game in the same vein as Wacky Wheels or 2FAST4YOU. It was created as a sample game for the DIV Games Studio integrated development environment, primarily to show the effects of sprite scaling and rotation routines.

As such, Speed for Dummies is very simple: there are only two tracks (forest and desert) and four cars, and no bonuses. The main hindrance in completing a race lies in bumping into edges of the track, which temporarily slows down the player's car to almost complete stop. Nevertheless, you can select how many laps to run in each race, and choose one of the three difficulty levels. There is also a two-player split-screen mode.

Originally, Speed for Dummies was included on the DIV Games Studio CD alongside its entire source code. In the early 2000s, a downloadable English version was also made available at the international DIV Games Studio website . 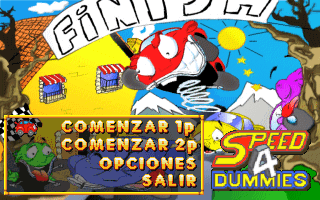