You can play Star Wars: Dark Forces on this website so you don't need to download and install the game on your computer. We recommend to use Google Chrome when playing DOS games online.

You can download the full version of Star Wars: Dark Forces from the download store listed below.

The demo includes a modified version of the first level of the full game.

To add the optional introductory and end-level cutscenes, unpack the contents of dforces2.zip and dforces3.zip into the same directory where the demo is installed.

Behind a veil of secrecy the evil Empire is creating a doomsday army - one that, if finished, will become the final cog in the Empire's arsenal of terror and domination.

Join the Rebel Alliance's covert operations division, infiltrate the Empire, then battle every man and machine the Imperial Forces can muster. Search a vast galaxy for clues, attack enemy bases - all in a desperate attempt to stop the activation of this fearsome new weapon.

It's you and your blaster against an entire Empire.

May the Force be with you.

Enter one of the following codes during the game to cheat: 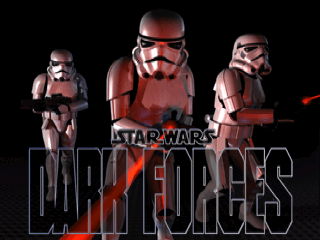