You can download the full version of Terra Nova: Strike Force Centauri from the download stores listed below.

The conflict between the Jupiter colonists and the totalitarian Earth Hegemony had been ongoing for decades, with the threat of military escalation growing with each passing year. In 2151 the Hegemony agreed to tolerate the dissident colonists if they would relocate to the Centauri system, discovered a few years before to contain two habitable planets. By 2154, the last of Jupiter’s colony ships had departed the Solar System.

Over the next century, the Centauri formed a stable clan-based society; the colony grew and prospered on the planets of New Hope and Thatcher. The economy thrived, their technology grew in new directions, and in 2239 the Centauri opened trade and ambassadorial relations with their one-time foes, the Earth Hegemony. But with economic success came a growing criminal element, bands of pirates and smugglers wanting the fruits of the new society without sharing in its labors. The Centauri clans created military organizations to shut down these operations; with their advanced hardware and technology, they had little difficulty.

Recently, however, a new breed of pirate has begun to emerge. More organized and armed with powerful weapons, these new pirates have prompted the Centauri government to establish an elite fighting force, the Strike Force Centauri. It is the charge of this group, the SFC, to battle the new threat to Centauri peace, and discover the dark secret behind the pirates' growing military might. The SFC is looking for recruits to help fight this new threat. Do you have what it takes? 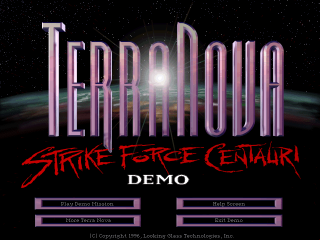