You can play TerraScape - Breakdown Velocity on this website so you don't need to download and install the game on your computer. We recommend to use Google Chrome when playing DOS games online.

TerraScape - Breakdown Velocity is, simply put, a pretty straightforward clone of Terminal Velocity written in QuickBASIC. It features fully 3D textured landscapes, vehicles and buildings, and while the plot and setting are somewhat different (you're a lone pilot in an advanced craft fighting against evil corporations), the game looks and plays very similarly to Terminal Reality's breakthrough 1995 hit.

Being one of the more sophisticated QuickBASIC games, TerraScape is an interesting piece of software, but it appears way less enjoyable than the original Terminal Velocity for a number of mostly technical relasons. First off, resource-heavy QuickBASIC games seem not to perform really well in DOSBox -- originally it was intended to be played under Windows 98 or XP, not in pure DOS, and the pacing here can get really sluggish even under maximum cycle settings. For the same reason, neither sound effects not music can be heard in DOSBox, as the sound system used here (similar to 'Ghini Run) was supposed to take advantage of Windows sound drivers. Additionally, the game can be only controlled via keyboard, with no support for mouse or joystick.

TerraScape is an interesting historical curiosity to check out, and it is certainly playable, but if you're looking for some dynamic fun, you'd better pick the original Terminal Velocity, Descent or Radix: Beyond the Void. 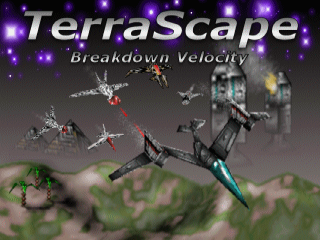