The Legend of Kyrandia: Malcolm's Revenge

You can play The Legend of Kyrandia: Malcolm's Revenge on this website so you don't need to download and install the game on your computer. We recommend to use Google Chrome when playing DOS games online.

You can download the full version of The Legend of Kyrandia: Malcolm's Revenge from the download store listed below.

NOW WE GET TO HEAR MALCOLM'S SIDE OF THE STORY....

When last we left Malcolm, the wicked Court Jester from the original Legend of Kyrandia, he had been accused of murdering the King and Queen. After much ado, he was turned into stone by Brandon, restoring peace and harmony to the land.

All the while, Malcolm has spent many an hour in his statuesque form, plotting and planning a way to get even with Brandon and those of Kyrandia who betrayed him. Malcolm's Revenge opens as lightning strikes and he breaks free from his stony prison. Now it's his turn for vindication, or at least to set the record straight.

Created by Westwood Studios, the development team behind such smash hits as Dune II, Lands of Lore, and Young Merlin, Malcolm's Revenge features the same easy interface and sense of humor that made The Legend of Kyrandia and its sequel, The Hand of Fate, smash hits.

Players will guide Malcolm through his escape and capture, to the Ends of the World, into the Underworld, and finally back to wreck havoc on Kyrandia. To accompish this, the player must use disguises, toys, and whatever bits of magic he can aquire.

Kyrandia Book 3: Malcolm's Revenge surpasses its predecessors with lots of cool graphics and movie-like cutscenes. The lush landscapes and three dimensional backdrops are enhanced with vibrant colors and many of the same characters introduced in the first two episodes. Malcolm's Revenge is as much a treat for the ears as it is for the eyes, complete with a whole new soundtrack and fully digitized speech. 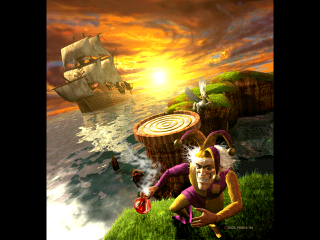