You can play Wrath of Earth on this website so you don't need to download and install the game on your computer. We recommend to use Google Chrome when playing DOS games online.

The shareware version includes just one level out of 12 in the full game.

Wrath of Earth is a sci-fi first-person shooter with more depth and complexity than an average Wolfenstein 3D clone. You take on the role of Commander Kreigson of United-Worlds Defence Corps, sent on a solo mission to a distant colony with which all contact was lost after an attack by an unknown alien force.

The game bears a certain similarity to Bungie's Marathon (a Mac exclusive) as far as the setting and plot goes but runs on an engine comparable to that of Blake Stone: Aliens of Gold. The player wears an armoured Bio-Suit with a multitude of weapons, and can also pick up and use a variety of items. There are still surviving colonists that may lend some help (just like Blake Stone's informants) but otherwise cannot fight against the invaders on their own.

The ultimate objective is to save the colony and defeat the alien force. 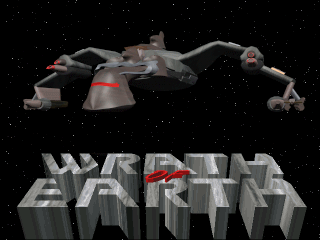