You can play Extreme Assault on this website so you don't need to download and install the game on your computer. We recommend to use Google Chrome when playing DOS games online.

Extreme Assault lets you fly a futuristic helicopter and drive an advanced battle tank in fully 3D rendered, texture-mapped environments. The game is not strictly a simulator and plays more like arcade flyers in the vein of Terminal Velocity or Descent, and tank driving akin to Gunmetal. You will be sent on solo missions against an enemy force described as "aliens" but largely using familiar technologies: helicopters, tanks and armoured cars, but also giant mecha.

The playable demo allows to fly the helicopter part of the first two operation areas: The Lost Valley and Trapped Beneath the Earth. The full game has a total of six areas and also includes tank levels in each.

Extreme Assault required a powerful computer, so a high CPU cycle count in DOSBox is recommended to play the game in high resolution (about 77000 cycles). 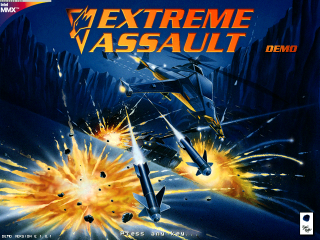