You can play Powerslave on this website so you don't need to download and install the game on your computer. We recommend to use Google Chrome when playing DOS games online.

The demo version includes the first four single-player levels from the retail game, the tutorial level and one multiplayer level.

NOTE: This game (including the demo) can be played directly in Windows using a third-party source port (please see the links section below).

A hostile alien force has invaded Karnak, and a special forces team was sent in to investigate. One of the operatives got separated from the rest, and must now find his way into the invaded city to stop the alien threat.

Powerslave is a fist-person shooter quite similar to DOOM, with an Egyptian setting. It uses the same Build engine that powers Duke Nukem 3D or Shadow Warrior. Gameplay is as much puzzle-oriented as it is combat-oriented, with vast, complex levels. At the player's disposal is an arsenal of powerful weapons as well as various helpful magical items. 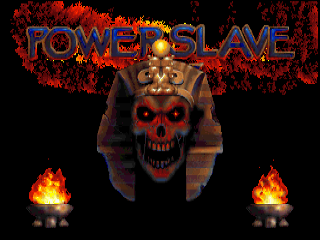